Some of these rare high-risk genes increase the risk of melanoma of the skin. The most common are CDKN2A and CDK4 and there is information on these genetic mutations on this web site. Overall, among individuals with skin melanoma, about 2% of them have a mutation in CDKN2A or CDK4. Because mutations in these genes can be passed on through families and increase risk of melanoma, then families with several family members who have each had melanoma are more likely to carry one of these high risk rare genes. In recent years, mutations in other genes have been found to significantly increase melanoma risk. These genes include POT1 and TERT. There is also information about POT1 on the website.

This information is about a fifth gene called BAP1. BAP1 was first discovered as a gene which is commonly mutated in melanoma of the eye, (known as uveal melanoma). At first in 2010, the damaged DNA was found just in the tumours themselves but in 2013 in one person the mutation was found in the eye tumour and the blood so that it was recognized that this was an inherited mutation. Since then considerable progress has been made in understanding what inheriting a mutation in the BAP1 gene means for people, and this article describes what is known so far. However, as this melanoma gene has so recently been discovered to be a cause of melanoma in families, much remains unknown.

It is important to realize that inherited BAP1, POT1 or TERT mutations are very rare indeed even in melanoma patients.

BAP1 mutations in families and melanoma

Although we now know that inherited mutations in the BAP1 gene causes skin melanoma in families just as do the more common melanoma genes such as CDKN2A, there are some important differences.

Diagnosing an inherited mutation in the BAP1 gene

The diagnosis is usually suspected on the basis of the family history. The medical staff would ask the family about who had developed a cancer, at what age and what type of cancer. The family tree below is not real but shows the type of family history which might be suspicious for an inherited BAP1 mutation. 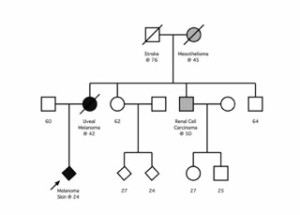 Normally gene testing is only carried out on a family member who has themselves had cancer, as a mutated gene is more likely to be found in such a person. The gene testing may take some considerable time to produce an answer because the tests are specialized and time may be required for additional tests to be sure that the change in the gene detected was a significant (harmful) one.

At the moment it is not clear what screening should be offered to family members with BAP1 mutations. With time, research will allow advice to be given on the basis of detailed data collection from families.

In the meantime clinical geneticists are likely to advise screening based upon what is known about BAP1 families and the person’s own particular family history. Having too many x-rays may also increase the risk of cancer so the medical teams seek to avoid too many scans whilst trying to scan frequently enough to detect cancer early.

Regular ultrasound examinations of the kidney would normally be suggested, an x-ray, low-dose spiral CT or MRI might be suggested for the chest (variable between health care systems), and less frequently body scans for those individuals who carry a BAP1 mutation.

We have no proof that lifestyle change will prevent cancer but it seems likely that this is so. It therefore seems sensible to suggest the following:-